In 2014, Rachel from the Dubzz team travelled to Taveuni to complete voluntary service with Rotary Rotorua Sunrise. This month, she returned to undertake further volunteer work with the organisation.

After my first visit to Taveuni in 2014, I was excited to return to see how things had changed. I remembered a beautiful island with natural gardens, no hustle and bustle, fabulously humble people, and few economic or employment opportunities. A small island in the Pacific, Taveuni has a population of around 19,000 people, and is a 1.5 hour flight north of Nadi, Fiji. It is remote and the way of life is simple, with no electricity, no reticulated water to the homes, and a low level of employment. Many people never leave the island. 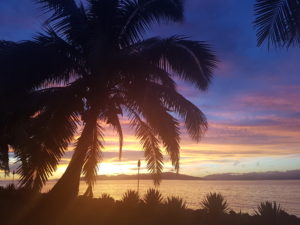 As I recalled, the island was still lush and bountiful and the beaches were still idyllic with sparkling blue waters. There were far more cars on the roads than there were three years ago, but the local people were as happy as I remembered as they went about their daily lives, gathering food and water, and washing or bathing in the river. As before, I saw plenty of wildlife including beautiful butterflies, stray dogs, lizards, mice, rats, and frogs, as well as giant moths and plenty of mozzies to keep us on our toes.

Since my last visit, Cyclone Winston had made a devastating impact on Taveuni, hitting the island in February 2016. I had heard there had been significant damages, but did not expect the residents to still be cleaning up the pieces, and rebuilding many of the homes and schools that had been destroyed. Seeing the depth of destruction and on-going struggle to simply return to normal life certainly made me feel grateful for the opportunities and resources that are available to us in New Zealand.

My fellow volunteers included Lynne Joseph, Gary Smith, Roger Hall, Michele Weston and Laurie Morrison, all members of Rotary Rotorua Sunrise. During our three-week stay, we worked on a doctor’s house at the local hospital and a teacher’s house at one of the local high schools. In Taveuni, the community is responsible for maintaining the school and hospital buildings, with the government responsible for supplying staff.

The projects on the island are all managed by the Rotary Club of Taveuni, driven by Joey and Geoffrey Amos. Their club, made up of 10 members, works on projects valued at over $600,000 per year including schools, the hospital, student scholarship opportunities, eye clinics, health clinics, and sustainability, water and sanitation projects. 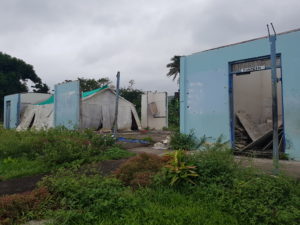 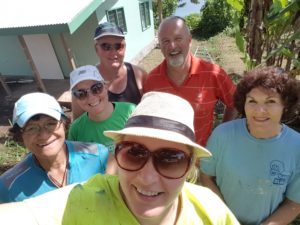 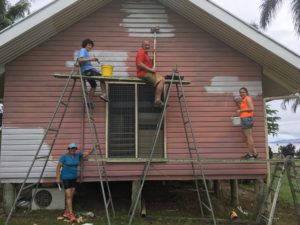 Our first project was the doctor’s residence, which was a large, 3-bedroom house in urgent need of repair and refurbishment. The work needed to be done quickly so that the hospital could get another much-needed doctor on site. Each day we arrived at the hospital around 8am to work; cleaning, repairing, sanding and painting both the inside and outside of the house. We worked alongside a team of locals who were re-tiling, cleaning up the grounds, and repairing or replacing elements of the house. We had many visits from hospital staff who were interested in the progress and so grateful for the support. We had very generous people drop off drinks, morning tea and lunches as a way of saying “Thank you”. We shared plenty of laughs with the local work team, as we identified the strengths and weaknesses of each of our volunteer team members. In two weeks, we completed the refurbishment of the interior and exterior of the house, with the new kitchen and bathroom installation taking place as we finished. 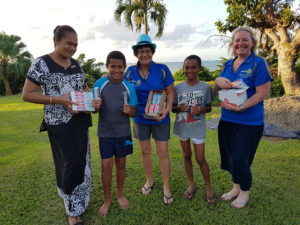 For our second project, we got to work painting a new teacher’s house at Niusawa Methodist School. The house we were working on was the eighth residence built by the Taveuni Rotary team since the cyclone. It was pre-framed and bolted together, ensuring durability for any future cyclonic weather events. Since the community is responsible for providing school buildings and teacher accommodation, these houses are major a priority; otherwise the teachers do not get assigned, and the kids do not get taught.

During our stay, we visited the Niusawa School classrooms and the girls’ dormitory that I was part of refurbishing in 2014. We were thrilled to see that it had escaped major cyclone damage, and that the students were still excited about having their own bunks and a wardrobe, which is considered a luxury in Taveuni. During our visit, we gifted the students with book bags so that every pupil received their own bag to put their books in. We also delivered crayons and pencils to the kindergarten at Niusawa. Everyone was so humble and grateful, and we were thanked with morning tea in the Principal’s office.

In our free time (which wasn’t much) we travelled the length of the island and visited villages that had been heavily affected by the cyclone; Lavena and Vuna. Here they were still rebuilding classrooms and teaching out of aid tents 18 months on. Their solar power structures and water filtration systems had been damaged in the cyclone and were still under repair, which means the people in these villages were struggling for mere survival. The road down to Vuna was so rough that we all had sore backs for the next few days on the job. 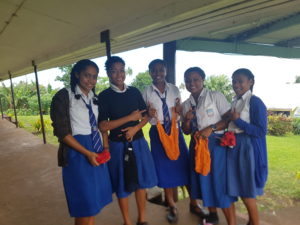 We spent one morning out on the water and went snorkelling on the Rainbow Reef, rated as one of the top dive spots in the world. This was a spectacular experience for us all, with knowledgeable instructors pointing out many of the highlights on the reef, including colourful fish, corals, and reef sharks.

This trip put things into perspective for me – In our modern world we have so many stresses, yet these worries are insignificant compared to what people face in Taveuni, where basic survival can be a day-to-day challenge. Despite this (or maybe because of it) the people are so happy and are willing to give you whatever they have to demonstrate their gratitude. It can take an experience like this to remind us that we take so much for granted – lights from a switch, water from the tap, easy access to information on the internet, and ease of travel with advanced infrastructure.

Taking three weeks out of my normal day to day life gave me a huge amount of mental clarity and space to think about many things that we are often too busy to think about. Switching off from the constant connection of my regular made me think a lot about the world we inhabit and how the challenges we face can vary so dramatically from place to place.

Helping others that have so little and need so much help is a truly liberating, rewarding, and humbling experience; I recommend that everyone get involved and do something similar. You arrive aiming to give everything you’ve got, but you receive so much more in return. 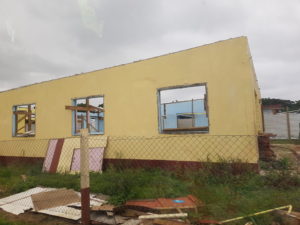 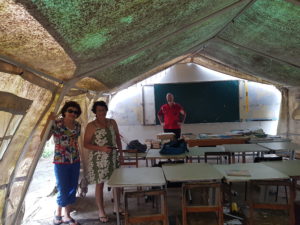 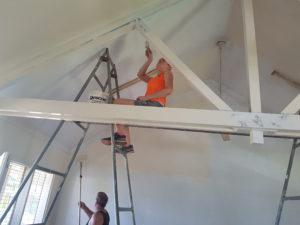 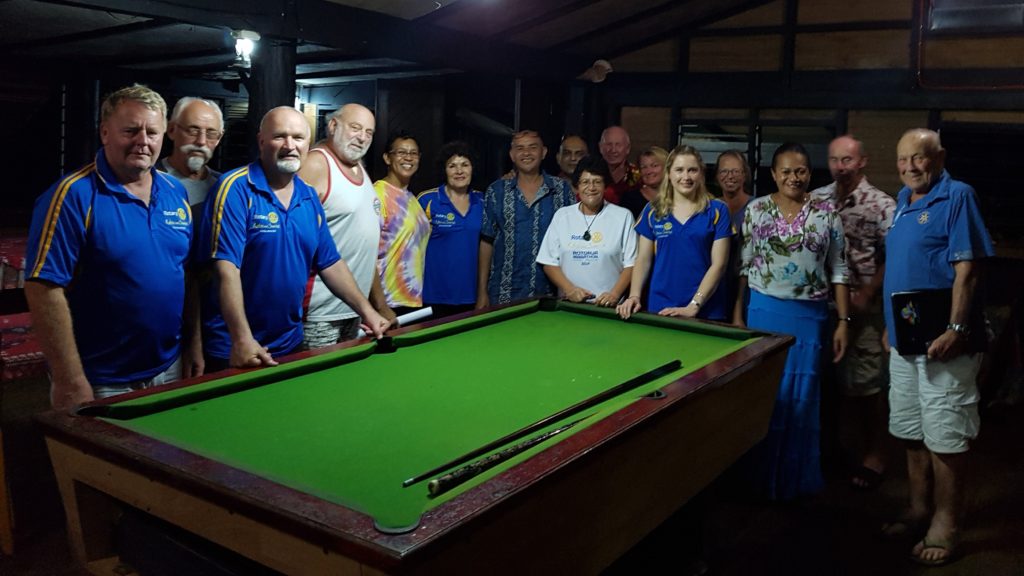 Rachel is the founder of Dubzz with qualifications in Marketing, Business, Science & Maori. She is proud Mum to Hugo and Bella, and serves the community as a Justice of the Peace. In her free time Rachel enjoys cooking, gardening and walking her dog Henry in the Redwoods.

Our newest team member from Portland, Oregon USA, Julie Lewis, is enamoured with this place we call “Home”

I Have a Crush on You, Rotorua

Rachel had the audience nodding their heads in agreement, and provided some key takeaway lessons. Overall a great speaker and we would happily have her back in the future to speak again.